You are here: Home1 / Satellite news2 / Satellite News3 / NGSO Broadband & 5G: the interference issue between them 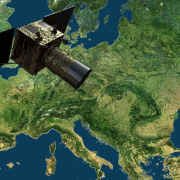 In a letter to the Federal Communications Commission, OneWeb urged the regulator to reject a request from satellite broadcaster Dish Network and spectrum holder RS Access to run two-way mobile services in the band which would harm the NGSO broadband.

Plans to use the 12 GHz band for terrestrial 5G would severely disrupt non-geostationary orbit (NGSO) broadband across the United States, OneWeb said July 11 in analysis supporting an earlier study from SpaceX.

To connect user terminals, the SpaceX-owned Starlink and OneWeb megaconstellations use a satellite downlink band that extends from 10.7 GHz to 12.7 GHz.

The analysis from OneWeb is the latest in a string of studies assessing how a high-power mobile network in the 12.2-12.7 GHz band would impact NGSO services.

According to studies conducted by engineering firm RKF Engineering Solutions for RS Access, the 5G network would impact fewer than 1% of NGSO terminals, and mitigation techniques are readily available for those that are affected.

However, SpaceX told the FCC on June 21st that its analysis shows Starlink users would suffer harmful interference 77% of the time.

SpaceX said the RFK analysis was full of inaccuracies, and also failed to address how NGSO operators share the band among themselves through coordination agreements.

The 5G for 12 GHz Coalition, which includes Dish and RS Access, hit back July 7 by slamming SpaceX’s study as “scientifically and logically flawed.”

Baum said OneWeb’s analysis largely used the same assumptions as the RFK study, with “corrections only to the most egregiously flawed assumptions adopted by RS Access when applied to the OneWeb system, some of which overlap with corrections made by SpaceX in its study.”

OneWeb spokesperson Katie Dowd said the study drew from a suburban area where both systems could be deployed, which she declined to disclose.

“Additionally, we made a number of changes to take into account the OneWeb system and our business model, such as looking at NGSO user terminals deployed on the tops of several story commercial buildings that one might find in a suburban business park,” Dowd said.

Like SpaceX, OneWeb’s main issue with the RFK analysis is its assumption that NGSO FSS terminals will be deployed with a heavy bias toward rural areas, while mobile base stations and devices will be heavily skewed towards urban areas.

“There is no real world justification for this bias,” Baum wrote to the FCC.

This is “completely masked in the RS Access studies, since it looks at deployment spread over the entire United States as opposed to local conditions,” Baum said.

The RS Access studies also only used Starlink to model interference, ignoring other NGSO operators she said “are architecturally, systematically, and entrepreneurially distinct from Starlink.”

According to Baum, including OneWeb and others would substantially increase the number of customers that an expanded terrestrial service would adversely harm.

While Starlink is currently providing broadband services across the United States, OneWeb expects to cover the country in 2023 after resuming satellite deployments later this year.

“The RS Access studies were only able to show that a two-way mobile terrestrial service could coexist with incumbent NGSO FSS operations in the 12 GHz band by creating artificial separation between the geographic operating areas of satellite user terminals and mobile devices,” Baum added.

“In reality, no such separation can or will exist. As the record illustrates, the viability of both NGSO FSS and mobile deployments hinge on the ability to be ubiquitously deployed.”

Chip Pickering co-chair of the 5G for 12 GHz Coalition, described OneWeb’s study as “another in-house, non-independent effort to discredit the scientifically proven feasibility of coexistence” in the 12 GHz band.

“It is important to note that the FCC has already made it clear that any NGSO FSS company utilizing the 12 GHz band is doing so at its own risk and there should be no expectation of exclusivity within the band,” Pickering said.

He said the coalition remains committed to working with the FCC to prove how NGSO and terrestrial 5G operators can co-exist in the band.